On my Yankee Yapping Facebook page, I noticed that I am closing in on 500 fans. The number 500 is pretty high and it takes a baseball player a long time to reach that number, especially in terms of home runs.

On August 4, 2007, Alex Rodriguez became the first Yankee player to reach 500 home runs since Mickey Mantle, who slammed his 500th long ball on May 14, 1967. The current Yankee third baseman became only the third player to hit his 500th career homer in a Yankee uniform, of course joining Mantle and the legendary Babe Ruth.

A-Rod, Mantle, and Ruth are now in the record books and are pretty much considered to be three of the greatest home run hitters in baseball history.

But Rodriguez’s 500th home run could not have come at a worse time. For me.

The day after A-Rod left the yard for the 500th time I went to the Yankees vs. Royals game. I’ve always said (and still say it to this day) that I wished he had waited one day. By about 24 hours, I missed a moment in Yankee history.

Two of my cousins had four tickets to the game and invited my sister and me to go with them to Yankee Stadium. We had excellent seats; we sat on the main level on the third baseline, practically right behind the Royals’ dugout. We had such a wonderful view of the field!

Then-manager Joe Torre (sort of) rested Rodriguez the day after he reached 500. Before he hit the big homer, A-Rod had been struggling immensely at the plate. He waited eight days and 28 at-bats to hit the elusive 500, but he eventually got a hold of one and accomplished the feat.

So on Aug. 5, A-Rod started at the designated hitter position while Wilson Betemit played third. As Torre used to say, A-Rod had “half a day off.”

The Yankees jumped on the Royals early, scoring four runs on the second inning. Melky Cabrera singled to score his buddy Robinson Cano, Derek Jeter drew a bases-loaded walk to drive in Betemit, and Bobby Abreu singled to score Andy Phillips and Cabrera to put to the Yanks ahead, 4-0.

In the bottom of the third, Hideki Matsui launched a solo home run into the right field porch, giving the Yanks a 5-0 lead. What some people may not know was that home run was Matsui’s 100th career home run as a member of the Yankees (and in Major League Baseball in general).

So even though I missed A-Rod’s 500th homer by one day, I saw Matsui’s 100th homer in-person, the day it happened.

In the bottom of the fourth, Rodriguez stepped up to the plate. He received a thunderous ovation for what he had done the day before and almost every Yankee fan was on their feet cheering and chanting, “501! 501! 501!”

Although he wasn’t able to smash yet another homer, A-Rod drove in a run with a sacrifice fly to deep left-center field to score Jeter, giving the Yankees a 6-0 lead.

Kansas City finally broke out and scored in the top of the sixth when Ross Gload belted a long, two-run home run into the upper deck in right field off Mike Mussina. His home run went a long way, and I mean a long way. I’m not sure if that ball has landed yet. Just watching that ball fly out of the park and into the upper deck was pretty amazing, even though it was for the opposing team.

But the Yankees would get those runs back in the bottom of the frame.

Cabrera hit a solo home run to right field, a screaming line drive that just cleared the right field wall. Yankees were now on top, 7-2. I didn’t notice at the time (and I didn’t find out until I watched Sportscenter after I got home) but the same person who caught Matsui’s home run ball caught Cabrera’s.

That’s one lucky fan; he caught two home run balls by two Yankees in the same game. After I heard that, I wished my seats were behind the wall instead of behind the dugout!

Later in the sixth, Matsui drive in another run with a sacrifice fly to score Jeter, putting the Yankees ahead, 8-2. It seemed the Yankees were doing everything right, but the Royals did not go down without a fight.

Mark Teahen singled off side-winding reliever Mike Myers to score David DeJesus in the top of the seventh and on the same play Esteban German scored on a throwing error by Cabrera, cutting the lead to 8-4.

Myers gave up yet another run in the top of the eighth, surrendering an RBI single to Joey Gathright that scored John Buck. All of a sudden the Royals were down by only three runs. Uh oh…

Replacing Myers was the great one, Mariano Rivera. The Yankees’ ace closer was summoned to record a four-out save. As Enter Sandman blared through the Yankee Stadium speakers, I noticed a sign someone in front of me was holding up. It read:

It was the truth; right around that time the Yankees were on their run to the Wild Card title in a season that looked hopeless. The Yankees had no business even being considered for the playoffs toward the beginning of the year, but they picked up their game over the summer and earned the Wild Card spot, basically on the shoulders of Rodriguez.

I still believe that if A-Rod had not been as good as he was, the Yankees never would have made the playoffs. He undoubtedly carried them to into the postseason. 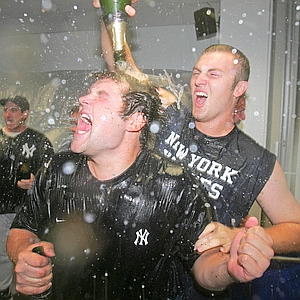 Win Mussina, loss Gil Meche, save Rivera. Win A.J. Martelli. My sister, my cousins and I smiled as we listened to Frank Sinatra’s New York, New York as we filed out of the turnstiles.

Any day the Yankees win, it’s a good day.

I had a lot of fun that day, I only wish Rodriguez had not hit the big home run the day before. Although seeing Matsui hit his 100th career home run was exciting, it would have been nice to see A-Rod’s 500th. The whole team came out of the dugout to congratulate him and you could just tell it was a special and historic moment.

Some of the Yankees have said that Rodriguez’s milestone homer was their favorite memory in the old Stadium and to be there for it would have been amazing. Missing it by one day fills my heart with regret and I still wished he had gotten that one pitch to hit just 24 hours later.

The bottom line, however: 500 is a big number. And to have almost 500 fans on the page for this blog is pretty neat. Thank you all for reading and I hope it continues to grow!