With one week and one day left of spring training baseball, the Yankees are starting to get into regular season form. Saturday afternoon the Bronx Bombers beat the Detroit Tigers in Lakeland by a score of 2-1.

Here’s what I made of it… 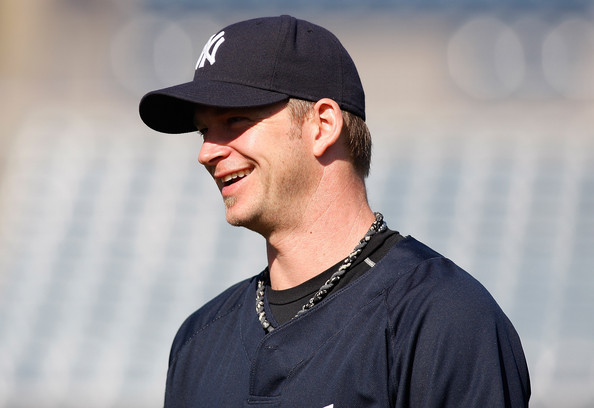 Coming into this game A.J. Burnett was 0-1 this spring, not exactly setting the Yankees on fire. I recently wrote a blog about Burnett, calling out his inconsistency and how everyone compared him to Dr. Jekyll and Mr. Hyde last season.

Today, he was “Dr. Jekyll-Burnett.”

The Yanks’ number two man tossed 91 pitches over 6 2/3 innings of one-run ball. He only gave up three hits, struck out two, and issued three walks. Not a bad day at the office for Burnett and it was a good sign, considering the Tigers played most of their regulars.

Manager Joe Girardi liked what he saw from Burnett today too; the skipper said he was “mixing his pitches, using the fastball more effectively, and was demonstrating better control than his last few starts.”

Could not have said it better myself. Burnett was also in a good rhythm with Jorge Posada, who was catching him this afternoon. Many people have made issues about the Burnett-Posada battery in the past, but if they work together as nicely as they did today there won’t be many problems.

Overall, Burnett looked great. A smooth and effortless delivery, a good fastball, a great breaking pitch, and everything was working for him. Let’s just hope he pitches like this for the better part of the upcoming season.

Burnett will have one more start this spring before April 6–his first regular season start in Boston vs. the Red Sox. 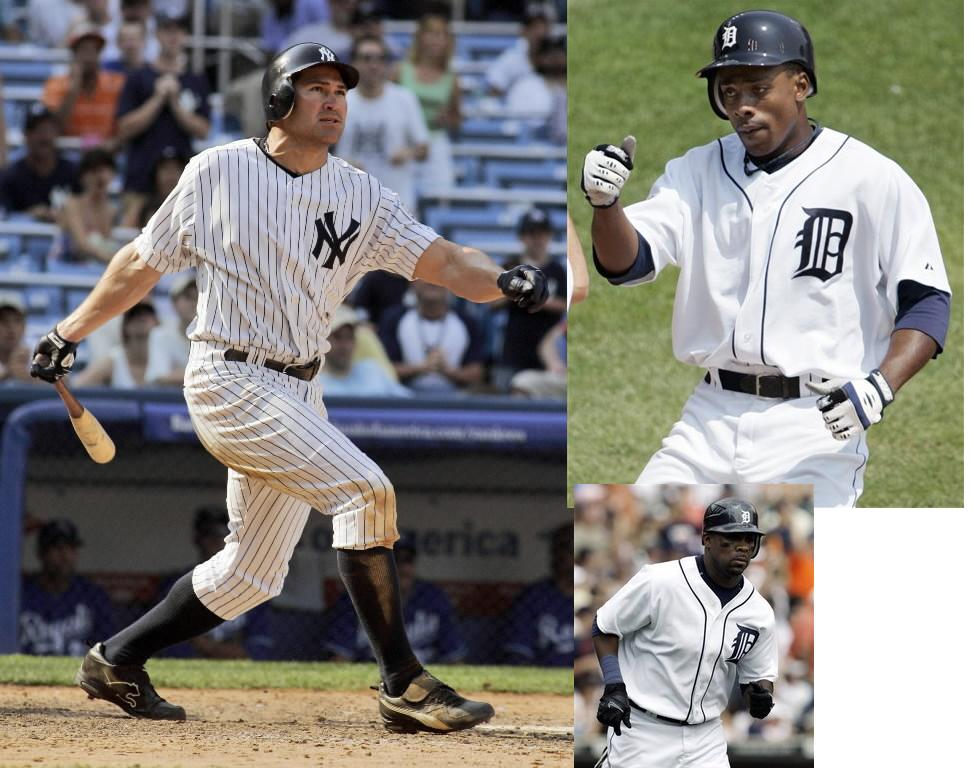 What was interesting about this game was the scoring. The Yankees scored two runs, both of which were brought on by former Tigers. The Tigers plated one run, which was scored by a former Yankee.

In the top of the first, Curtis Granderson knocked in Posada with a two-out RBI single. Of course Granderson played for the Tigers last season, as did Marcus Thames.

With the game tied at 1-1 in the top of the fourth, Thames took Tigers’ starter Nate Robertson deep to left for a long solo home run, a blast that gave the Yankees the lead they would not relinquish.

I think Thames needed that home run, considering the abysmal spring he is having. Heading into that at-bat, he was only averaging .114 at the plate. Yikes!

As for the Tigers, former Yank Johnny Damon scored in the bottom of the third on an RBI single off the bat of Magglio Ordonez. After Damon hit a two-out double Ordonez drove him in from second with a base hit to right field. I have to give credit to Randy Winn, who nearly made a spectacular outfield assist.

Damon just beat the throw to home plate, which was right on the money. A solid effort and a great throw by Winn, but the former Yankee was called safe at home.

It was just a strange day in terms of the scoring. Not many runs and a former player on each team lent a hand in each run. Crazy! 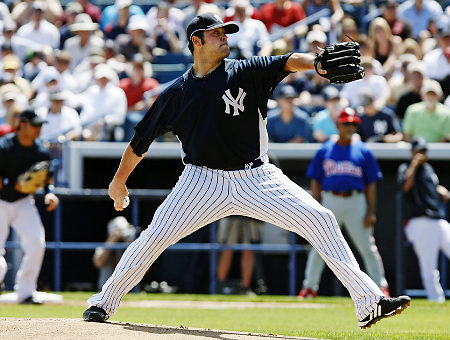 As announced on Thursday, Joba Chamberlain will begin the season in the bullpen. Phil Hughes won the fifth starting pitcher’s spot, much to the dismay of many people including Chamberlain.

A good friend of mine called me almost immediately after the Yankees made the decision. I answered my phone and he literally went off about how angry he was how Hughes was named the fifth starter over Chamberlain. His argument was that the Yanks wasted time with the “Joba Rules” and how they treated him last year.

Think about it: they put Chamberlain on six days rest and then had him go out and throw 4 1/3 innings in some instances. They put him through all of that just to make him a reliever again? My friend said,

“He may not have been Roy Halladay right off the bat, but Rome was not built in a day.”

Excellent point. Chamberlain is only 24 years old. If he was 34 years old and not performing at a high level as a starter, then I would say leave him in the bullpen.

I think many people forget what he did in July 25, 2008 against the Red Sox at Fenway. Chamberlain started the game and tossed seven shutout innings against the BoSox, beating the ace of the Red Sox staff, Josh Beckett. Not only did he pick up the win in that game, he only allowed three hits and fanned nine batters.

The capability and talent is there. He just needs a chance to put it to use.

Chamberlain said Hughes did a better job during spring training and earned the spot, but he also said he was disappointed. He has a right to feel that way. Everyone was expecting him to be the fifth guy and I can tell he wanted to be. But I think one thing has to be made clear:

Maybe everything will work out fine. Perhaps Hughes will find his niche in the rotation while Chamberlain finds his in the ‘pen. Just as he has proven to be a dominant starter, Chamberlain can be just as deadly as a reliever.

After all, he did pitch a scoreless ninth inning today and pick up a save. 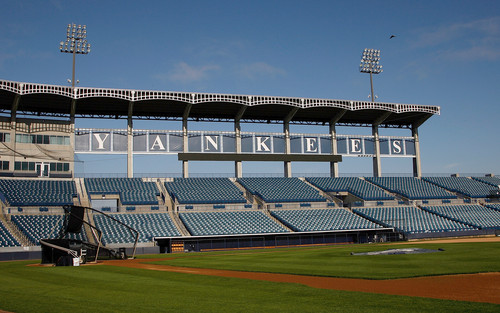 –David Robertson took over for Burnett and got out of the sixth inning. The more I watch him, the more I like him. He is great!

–Chad Gaudin was released by the Yankees. He made seven starts for the Bronx Bombers last year and the Yanks were 7-0 in those games. I hope he finds a new team, he can really help a ball club the way he helped the Yankees.

–Derek Jeter, Alex Rodriguez, Mark Teixeira, Nick Swisher, and Robinson Cano did not make the trip over to Lakeland today.

–Nick Johnson played first base this afternoon. I think it’s good he can play the field, but unfortunately he went 0-for-3 with two strikeouts at the plate. He did draw a walk though.

–As mentioned before, Randy Winn almost made a great outfield assist. Even though he missed it, he still did a great job in right field. He made some nice catches and even doubled up a runner at first after an awesome snag. I’ll give him a lot of credit–he won some battles with the sun and wind today!

–Chan Ho Park’s nickname is “Chop.” Cool. Even cooler, he worked his way out of a 1st and 3rd, one-out jam in the eighth inning.

–Joel Zumaya of the Tigers struck out the side in the sixth inning. He whiffed Granderson, Winn, and Ramiro Pena. I am officially scared of him again. He has been practically a non-factor these past two seasons, but his fastball hit 99 mph on the speed gun and his curve ball was NASTY. I am not looking forward to facing him this year.

–During the telecast, Michael Kay and Tino Martinez had a discussion about the pies to the face after a walk-off win. Kay said the dynasty teams were “very conservative” and that Paul O’Neill (at first) did not like the pies after the walk-off wins.

Martinez however liked them and said the team did not look like they were having fun the last five-six years. “The pies loosened them up,” Martinez elegantly stated.

I have to side with favorite player during the dynasty (Martinez) and say he was right.

–Tomorrow afternoon the Yankees take on the Tigers yet again, only this time they will play in Tampa at George M. Steinbrenner Field.