In convincing fashion, the New York Yankees once again beat down the Boston Red Sox, winning big time on Saturday afternoon by a score of 14-3.

There were a lot of stories from this one… 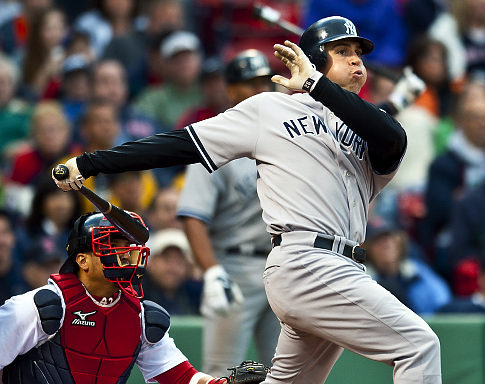 The Yankee calendar on my wall is in May and (no lie) the Yankee who is represented by the picture for the month is Mark Teixeira. Historically this has been his month, so I guess it’s no coincidence that he is the Yankee pictured on the calendar for the month of May.

The Yankees’ first baseman had a forgettable April, but in May he has been raking, even if it’s only been a week. Today he was 4-for-6 at the dish with three (yes, three) home runs and five RBIs. He scored four runs and became the first Yankee since Lou Gehrig (who accomplished the feat on June 23, 1927) to hit three homers in one game against the Red Sox.

His first homer broke a 3-3 tie in the top of the fifth and gave the Yankees a 4-3 lead. From there the Bombers never looked back, tacking on two more runs in the inning before the skies opened up and rain caused an hour and 24 minute delay.

After the rain cleared and the game resumed, Teixeira once again flexed his muscles in the seventh inning. He wrapped another solo homer around the “Pesky Pole” in right field for one of two runs the Yanks scored in the frame.

At last, in the top of the ninth, he creamed a pitch off Jonathan Van Every (yes, the Red Sox bullpen was so bad they needed to use outfielders as pitchers). Teixeira’s two-run bomb went so far, it bounced off the light pole above the Green Monster in left field. It marked his third round-tripper of the day and his fifth homer of the year.

Talk about a career day at the plate.

One great day offensively and everything turned around. Teixeira finally “got off the interstate,” if you will, raising his batting average up to .207. His home run count climbed and he is up to 20 RBIs on the year.

Teixeira really has it going right now, as he already has more hits and home runs than he did last month. He may be a slow starter, but when he gets going he turns into a monster. It’s almost as if Teixeira was a sleeping bull dog and the Red Sox threw rocks at him today.

Boston woke the sleeping bull dog and he relentlessly attacked them.

I have a feeling this is just the first dose of what’s to come from the Yankee first baseman. He seems to be seeing the ball a lot better and he hit to all fields today. If we see Teixeira in this form, the Yankee offense is going to be in great shape despite the injury problems they are currently undergoing. 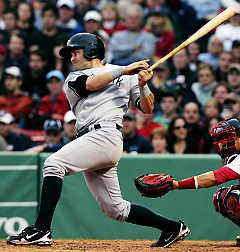 I am currently lobbying to find out whether or not Francisco Cervelli is human.

“The Cisco Kid” had a wonderful game last night and the beat continued this afternoon. Coming off his three RBI night last night, the backup catcher went 3-for-4 with five RBIs and a walk. He is currently hitting .429 in Jorge Posada’s absence and is proving that belongs in the big leagues.

A few years ago when Elliot Johnson ran him over at home plate and broke his wrist in Spring Training, I seriously doubted he would ever make it to the big leagues. But the Yankees kind of rewarded him and brought him up, thus giving him the opportunity to show us what he is made of.

And right now, he is showing us that he is made of steel.

The Yanks could not have asked for anything more. With Posada out, Cervelli could not be performing any better. I believe any team would sign up for a backup catcher who has the type of numbers Cervelli is currently posting.

Today he became the first Yankee catcher to record five RBIs in a game against Boston since Yogi Berra in 1957. Cervelli’s hitting is just speaking for itself.

Not to mention his defense and ability to call a good game.

The relationship between a catcher and a pitcher is oftentimes overlooked. If the two do not have a good rapport, there is no way they are going to have any success. It’s common sense. If you do not get along with someone, and you are both working toward the same goal, you are probably not going to reach that goal.

Cervelli just has the ability to work nicely with every pitcher on the Yankee staff. It doesn’t matter if it is CC Sabathia, A.J. Burnett or anyone. He works wonders with each pitcher.

Consider this: every Yankee starter is doing so well. Cervelli has been catching the majority of those games that each pitcher has been winning.

That pretty much tells me he is doing a wonderful job.

I can safely say that Cervelli is a lot of fun to watch. He has a great attitude, plays the game the right way, and that big old helmet always make me laugh. He can hit, he can field his position, and he is a nice, home-grown Yankee.

I’ll just say it: Cervelli is my favorite Baby Bomber. 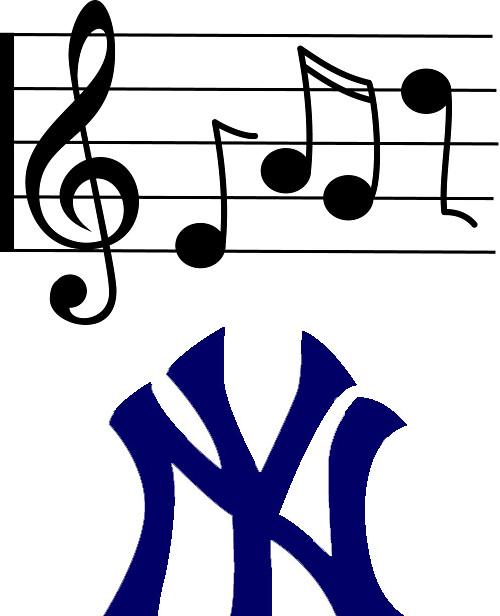 –CC Sabathia tossed 4 2/3 innings today. He would have gone much deeper into the ballgame if the rain delay did not slow him down. It’s unfortunate that they called for the tarp when he needed one strike to qualify for the win.

I don’t think it was fair; they should have let him just get that out and then roll out the tarp.

If Sabathia has 19 wins at the end of the year…he’ll be thinking about today.

–Nick Johnson is going to be out for awhile, as he injured his wrist last night. Why am I not surprised? We knew the day we signed him that this would happen. Should have just paid Matsui, Cashman…

–Dustin Pedroia was hit by a pitch in the bottom of the third. YES, it was intentional and quite honestly, Boston deserved it. Josh Beckett could have seriously caused some problems in hitting Robinson Cano last night.

You hit our second baseman, we hit yours.

Only problem was that after the HBP, Victor Martinez smacked a two-run homer to give Boston a 3-2 lead. In the long run it didn’t matter, because the Yankees offense exploded and eventually won big, but if the Yankees somehow did not come back and win, they would have second guessed that decision for the rest of the night.

–Nick Swisher had three more RBIs and two more hits today. As I said yesterday: en fuego! Swisher is having such a great year. It’s great to see him succeeding and this could really be his breakout year.

He has already won our hearts and he is just making us love him more.

–Randy Winn made some base-running mistakes today. He got nailed at home plate and got caught up in a rundown to kill a rally. He has done some good things to help the Yankees win this week, so I’ll lay off him for now.

–Alex Rodriguez had an RBI today, two hits, and three runs scored. His average is now up to .276, but he is still stuck on two homers for the year.

I’m not really worried about him right now. The Yanks are winning and as we saw with Teixeira today: it only takes a few at-bats to turn everything around. I’m sure Rodriguez will ignite and start launching some A-Bombs.

I can’t wait to see him get his 600th homer. Whenever it comes, I’m sure it’ll be a very proud moment for him and his team.

A-Rod is currently 15 homers away from the milestone.

–The Yankees have now won nine of their first 10 series this season. That is unbelievably impressive. They also extended their win streak to six games.

Watching the game and on my laptop, I went to YES’ Facebook page and posted a comment about Adrian Beltre. During today’s telecast, it was mentioned that he has committed seven errors this year.

Watching the post game show, I was shocked to hear Jack Curry and Bob Lorenz mention my name on TV and show my comment!!!

They also brought it up to fellow MLBlogger Kim Jones, and she offered her insight after they talked about mine. It felt really good, and I had to text everyone I knew and tell them I was featured on the YES Network; featured after a Yankee beat-down of the Red Sox, no less.

This isn’t the first time I have been featured on TV, either.

Back in 2008 and last year in 2009, I was featured on ESPN Baseball Tonight’s “Chatter Up” segment. It was the same principle on ESPN; you submit your comment at home and if they like it, they use it.

I had to write about it in this blog. I can never contain my excitement whenever I’m on TV. (That’s why I had to take the picture of my name on TV!)

I just wanted to say: THANK YOU YES NETWORK for using my comment!!!!!!!