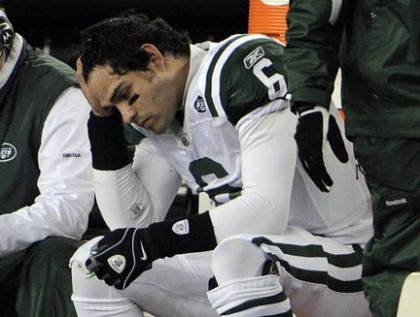 First thing is first: I’m sorry to all the Jets fans who had to witness their team fall in the AFC Title game this evening. I know how emotionally invested a lot of Jets fans are, but I suppose they cannot get too attached. Now, two years in a row, the Jets have lost the last game before the Super Bowl–and bear in mind they haven’t won the big game since 1969.

I watched the game in a New York City bar with a group of friends, one of whom is a huge Jets fanatic. In fact, he is such a huge fan that when they lost, he broke down and tears were in his eyes.

And I know how hard it is to have your heart set on that…and not get it. Believe me, I am familiar with the agnony of defeat. So I do feel for him and the Jets fans everywhere. Yet, as a fan of the New York Giants, I can at least take solace in my memories from 2007-08….

Now onto the main reason I am blogging…

I had a STRANGE dream the other night. And when I say strange, I mean it’s extremely random and very farfetched.

Anyway, it appeared to be before the game and the Yanks were warming up on the field. Cliff Lee walked up to the Yankees with a smile on his face and mockingly said,

I have never woken up from a dream in such anger; in such frustration. I was legitimately annoyed at Lee for something he said IN A DREAM. Maybe I am simply harboring bad feelings because the Yankees have had no luck signing any starting pitchers and they really pushed hard for Lee. That, and in reality, there are two spots in the rotation that are currently voided.

Not only that, but the problem doesn’t look as though it will be solved any time soon. I don’t see the Yankees making a huge blockbuster trade for a viable starter before the season begins. A few names have been thrown around. I have heard Freddy Garcia and Nate Robertson, who might be good for a number five spot.

At this point, I don’t have an answer. I just know that I am sick and tired of every off-season having to go through the dilemma of starting pitching. We always need it and it’s quite tiring.

And not having Lee, knowing he was so close to becoming a Yankee, also apparently irritates me–so much to the point where I am having weird dreams about it.

So I say to “Dream Cliff Lee” who mocked the Yankees: you suck. That was not polite at all and I hope I have another dream…where I run onto the field and break your arm for being such an arrogant jerk.

On a side note (and another funny, little story) I was looking through some of my old Yankee ticket stubs the other day. Yes, I am a packrat and I keep them because they spark so many memories when I look at them.

I picked up one from June 29, 2002–a Yankees vs. Mets game I went to with a number of my relatives from my extended family. That of course meaning, I went to a Subway Series game as a Yankee fan with a ton of Mets fans.

Looking at the stub, I remember what my crazy cousin Joe did. A Mets fan, he made a sign that read “Jason Giambi Stole My Car” and brought it with him to the game.

Why he did this, I will never know. But I will admit it was funny.

The Yankees wound up losing that game 11-2 and yes, it was difficult to stomach that. However, and Derek Jeter hit a home run, which was cool to see. Plus, the Yanks won the other two games in that series, so they had the last laugh. As they usually do against the Mets.