The A.L. ROY went to starting pitcher Jeremy Hellickson of the Tampa Bay Rays, as he received 17 first-place votes. Mark Trumbo of the Los Angeles Angels came in second place and Eric Hosmer of the Kansas City Royals finished third.

Ivan Nova, who most Yankee fans expected to be the first Rookie of the Year since Derek Jeter in 1996, finished in fourth place with just one first-place vote.

Cue the anger and confusion among the pinstripe faithful.

Truthfully, any one of the top four A.L. ROY finishers could have taken home the accolade. Hellickson, Trumbo, Hosmer and Nova each had seasons worthy of the award.

Since the last two A.L. Rookie of the Year awards have gone to pitchers (Andrew Bailey of the Oakland Athletics in 2009 and Neftali Feliz of the Texas Rangers in 2010) I had the feeling either Hellickson or Nova would win this year – keeping the trend of pitchers winning the A.L. ROY.

Naturally I felt Trumbo (left field, first base) and Hosmer (first base) weren’t going to win – although each of them put up outstanding offensive numbers for rookies. Trumbo clubbed 29 homers and knocked in 87 runs, despite sporting a .254 batting average. Meanwhile Hosmer smacked 19 home runs and drove in 78 runs, nearly hitting .300 with a BA of .293.

But as expected, the pitching trend kept up.

Hellickson made 29 starts for the Rays and went 13-10 with a 2.95 ERA and 117 strikeouts in 189 innings pitched. His won-loss record may not have been indicative of an overpowering season. Yet serving as a middle-of-the-rotation pitcher, Hellickson helped the Rays in a major way – especially considering they had traded away Matt Garza, a hurler the Rays thought to be a front-line starter, at the beginning of the year.

Nova struggled a little bit at the beginning of the season. He got shelled and lost some tough games in the early-going, but found a way to persevere and endure, grinding his way to a 16-4 record in 28 starts. He finished with an ERA of 3.70 and notched 98 strikeouts in 165.1 innings pitched.

Looking at overall individual stats – minus the record – Hellickson did have a numerically stronger year. Plus, that brief period when Nova was sent down to the minors in July probably hurt his chances at the ROY.

Yet, look at Nova and how he evolved throughout the course of the season; how he was slated to be a number four starter and was basically forced to become a number two when Phil Hughes and A.J. Burnett faltered.

Nova was forced to “carry the ball” so-to-speak, and he carried it very well.

Last week About.com published an article revealing who should win each end-of-the-year award, who the dark horses were, and who they thought would win. Not only did this article say Nova should win – but it said he would win.

“Who should win Rookie of the Year: Ivan Nova of the New York Yankees.

The 24-year-old Dominican righty finished 16-4, and did it while filling a gaping hole in the rotation of one of the best teams in the league. His ERA is just a so-so 3.70, but has a 2.7 WAR, which is solid in a relatively weak crop of rookies, at least statistically this season.

Who will win Rookie of the Year: Nova. Being in the big market will put him over the top.”

The author of that article seemed to have a lot of faith in the Yankee rookie – and not that I pay that much attention to WAR, or wins above replacement, but it was a good point – one I didn’t even take into consideration.

Those who vote for the end-of-the-year awards, AKA the baseball writers, clearly recognized Nova for his effort and what he brought to the Yankees – but in a lot of the fans’ minds, they did not recognize it enough because he didn’t finish first.

Lately the Yankee fans seemingly have a lot to be upset about when it comes to these awards after every season. Last year many felt CC Sabathia – who won 21 games – was robbed of the A.L. Cy Young when Felix Hernandez, who only won 13 games, captured the award over the Yankee ace.

What’s more, Robinson Cano was a front-runner to take home the A.L. Most Valuable Player Award in 2010, but he came in third to Josh Hamilton (the winner) and Miguel Cabrera (first runner-up). I know of more than one Yankee fan who truly felt Cano was, in a word, “shafted.”

The last Yankee to collect a meaningful end-of -the-year accolade: Alex Rodriguez, when he won the A.L. Most Valuable Player Award in 2007. To get there, A-Rod had to crush 54 homers, bat .314, and drive in 156 runs.

It’s a little obvious by now the writers who vote for the awards aren’t exactly Yankee lovers, and the media has apparently become somewhat “anti-pinstripe.” Cano and Curtis Granderson are two Yankees that can easily be considered for this year’s A.L. MVP, which will be announced a week from today on Nov. 21.

Now that Nova did not win Rookie of the Year, I don’t expect either Yankee to win the award.

Sabathia is up again for the Cy Young with his 19 wins this season and 3.00 ERA – but forget it. Everyone already knows Justin Verlander (24-5, 2.40 ERA) of the Detroit Tigers is taking home that piece of hardware.

The Yankees may have run out of luck this year when it came to the awards. Like it or not, the media is not on the Yanks’ side and ultimately they choose who goes home with the trophies.

If I ever make the Baseball Writer’s Association I promise to be fair and unbiased, as all writers should be. If I were voting this year, I probably would have given Nova a first-place vote, simply because he was valuable to the Yankees – and you can’t argue that. Just look at the points made in the About.com article.

Just know that if I ever get to the BBWA, there will be at least one writer who doesn’t hate the Yankees on the voting panel – although I would maintain my professional integrity as a reporter and consider every candidate respectfully.

As a Yankee fan though, I can only hope next year Jesus Montero breaks out and has the year of his life. If he can get his game up and have a “coming out party” of sorts in 2012, he can avenge this rather unfair treatment of Nova in this year’s A.L. Rookie of the Year voting – at least unfair in the minds of the majority of the Yankee fans.

On second thought, if I did have a vote this year, I would have voted for this guy… 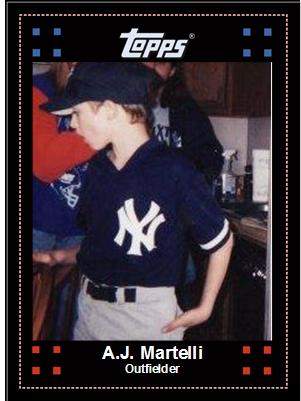