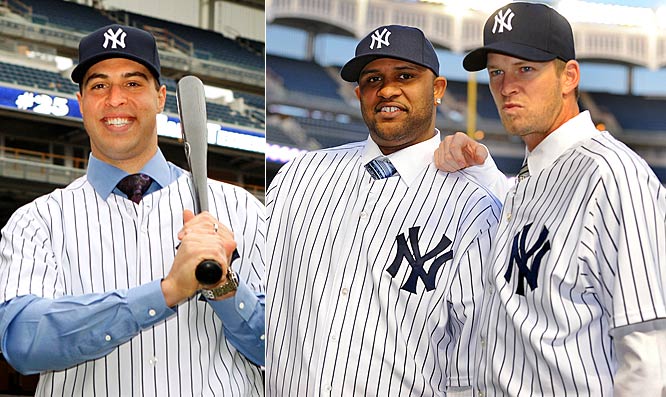 Four years ago this very day – two days before Christmas, 2008 – the Yankees agreed to terms with free agent first baseman Mark Teixeira, having already made agreements with free agent studs CC Sabathia and A.J. Burnett. By signing all three of them, the Yankees poised themselves for a strong playoff run; one that was capped by a 2009 World Series title.

Four years later on Festivus, or Dec. 23, it’s almost as if the Yanks are living in the Bizarro world. Instead of adding key players, the Yankees seem to be losing them.

Catcher Russell Martin chose the Pittsburgh Pirates on Nov. 29, and just last night, the Yanks’ seemingly only clutch player in October, DH Raul Ibanez, signed back with one of his old teams: the Seattle Mariners.

And now, just this morning, it was reported that free agent right fielder Nick Swisher signed a four year, $56 million deal to play for the Cleveland Indians, a nice early Christmas gift for the tribe.

It was almost common knowledge that Swisher was leaving. The fans didn’t expect him to return, and although I have no way of knowing, I would think the front office didn’t expect him to return, either. After a difficult 2012 postseason, both offensively (5-for-30 at the plate) and defensively (a costly misplay in right field in Game 1 of the ALCS) Swisher’s chances of returning to the Bronx were slim to none. 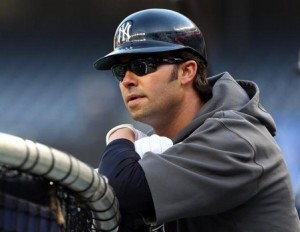 What strikes me the most is how the Yankees signed back three players who are older – Mariano Rivera (43), Andy Pettitte (40), and Ichiro (39) – but let two young(er) players in Swisher (32) and Martin (29, 30 in February) walk. Yes, they let Ibanez go, who is 40, but he was also basically the only hitter who did anything worthwhile in the postseason, so perhaps it evens out.

Bottom line: when the Yankees are accused of being a so-called “older team,” there’s no defense for it. If Red Sox fans – or Yankee haters anywhere in the world, for that matter – wish to call them the “Bronx Geezers” they are perfectly within their right, only because it’s accurate.

The youngest player the Yanks signed this winter was Kevin Youkilis – who’s 33 and will turn 34 on March 15, before the regular season begins. Add Youkilis to the mix of the 38-year-old Derek Jeter (39 on June 26 next year), the 37-year-old and injured Alex Rodriguez (38 on July 27 next year), and there’s no way around it:

The Yankees are old.

The way I see it, the only way for them to field a productive, young team again, like they did during the dynasty of the late ‘90s, is for them to draft better players (easier said than done, being that the Yanks will never have the first pick overall) – however, they will receive a first-round pick from the Indians because they signed Swisher and he declined the Yankees’ qualifying offer of one year and $13.3 million, an offer the Yankees made him on Nov. 9.

The Yankees get the pick as a result of a rule instituted under the collective bargaining agreement.

They also need to develop the minor leaguers they already have in their system now; groom the “Baby Bombers” to be big leaguers instead of letting their young guys fade away into obscurity down on the farm.

But I digress.  Now that he’s officially leaving town, it’s time to say goodbye and thank you to Swisher; remember all the great moments he’s afforded the Yankees and Yankee Universe over the past four years.

Out of the ‘pen…sort of 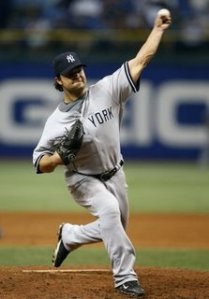 What sometimes gets lost in the Yankees’ run for the 2009 World Series title is how awful a start they got off to. They were beaten 22-4 in April by the very team Swisher signed with today (the Indians) and in a lot of ways couldn’t buy a win, the Bombers taking their lumps in the early going of a championship season.

On April 13, 2009 – the Yankee bullpen already taxed and in need of assistance – Swisher came in, not from the ‘pen, but like a regular Little Leaguer right from his position in right field, and a tossed a perfect eighth inning on the road vs. the Tampa Bay Rays. It marked the first time Swisher took the mound since he was a freshman in high school.

Swisher was the first Yankee position player to pitch since Wade Boggs came on in relief on Aug. 19, 1997 vs. the Angels.

Manager Joe Girardi laughed about it after the season saying, “You have to wonder why I didn’t bring him in (to pitch) more. Swisher was the only one of our pitchers that didn’t have an ERA.”

September 8 was his date 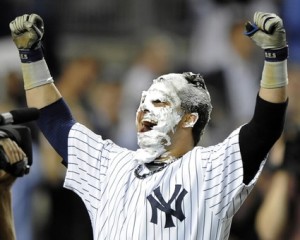 The Yanks gradually got a lot better following the rough the start in ‘09, winning 103 games when it was all said and done – none of those wins more important than Sept. 8 at home vs. the Rays.

In the bottom of the ninth tied 2-2, Swisher came up and lifted Dan Wheeler’s offering into the seats in right-center field, giving the Yankees a 3-2 win over the Rays, putting them one step closer to their eventual AL East crown.

Exactly a year later to the day, it was the same story, only against a different division rival.

At home vs. the Orioles on Sept. 8, 2010, Swisher once again came up with a chance to end the game, and did so with one swing. Swisher clubbed the ball deep off Koji Uehara, all the way into the visiting bullpen, giving the Yankees yet another 3-2 win – a win that prevented a sweep. 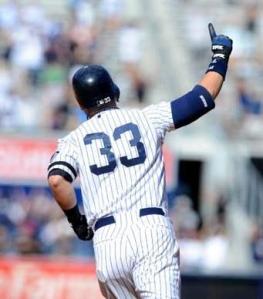 Call it coincidence, freak luck; call it what you will, Swisher had a knack for winning games on Sept. 8. 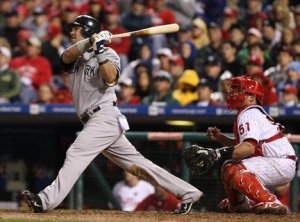 Swisher may not have put together the strongest postseason in 2009 in terms of offensive numbers, but he did manage to do what most players can only dream of doing: he hit a home run in the World Series.

In Game 3, the fall classic knotted at 1-1, Swisher homered to help propel the Yankees to an 8-5 victory over the Phillies, an impressive road win in the hostile environment of Citizen’s Bank Park. The round-tripper was one of only two hits Swisher collected in the World Series, but hey, at least he made it count.

The Yankees suffered two losses off the field in July of 2010. Bob Sheppard, the “voice of God” at Yankee Stadium had passed away on July 11 – and principal owner George Steinbrenner passed two days later on July 13.

The Yankees were off for the All-Star break when Steinbrenner died and when the news broke of Sheppard’s death. The Bombers faced the Rays in their first game back at Yankee Stadium on July 16, almost a must-win game.

After a beautiful pre-game ceremony, which concluded with Mariano Rivera placing flowers on home plate in memory of the fallen Yankee family members, the Yanks fell behind the Rays; trailed 4-3 going into the eighth.

Enter Swisher, who wouldn’t allow the Yanks to go down easy.

In the bottom of the eighth, Swish tied the game with a solo home run, and then ended it in the ninth with a spectacular, sharply-lined RBI single into right field for a 4-3 Yankee victory – one Sheppard and Steinbrenner would be proud of.

As per his classy personality, Swisher dedicated his big hits to the Boss.

“On a day like this when we celebrate his life, got to take him out on a W,” he told the media after the win. “Today was Mr. Steinbrenner’s day. Regardless of the situation, regardless of anything, we went out there and played that game as best as we could for him today.”

Taking out the Red Sox in grand style 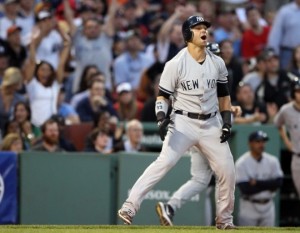 When the Yankees trailed 9-0 on April 21 this year on the road vs. the Red Sox, most fans (including myself) had given up hope; the game a lost cause and the afternoon a stinker.

But, as the Yankees learned in 2004, no lead is safe. And the Red Sox learned the same lesson they taught, as the Bombers rallied back from a nine-run deficit.

Once again Swisher proved his value on offense, being at the forefront of the comeback. He smashed a grand slam and a two-run double in the seventh to put the Yankees ahead, 10-9. They added five more runs in the eighth and embarrassed Boston 15-9 for a stunning victory; one that left Red Sox Nation in disbelief.

He smacked two homers on the way to a 6-4 Yankee win over Boston at home; pouring salt in Boston’s wound and adding to forgettable Red Sox season.

To Swisher, at least, the game possessed the atmosphere of a normal, heated Red Sox-Yankees game.

On behalf of Yankee fans everywhere THANK YOU Nick Swisher for four fun-loving years of service. The patented “Swisher Salute” to the bleacher creatures in right field during roll call will be sorely missed, as well as your affinity for big hits and ear-to-ear smiles following Yankee victories.

Although your time in New York ended on a sour note – a nasty elimination in Game 4 of the ALCS and a round of the blame game to boot – we truly appreciated everything you did in pinstripes.

Congrats on your lucrative, new deal and going back to your old stomping grounds in Ohio.

Best of luck with the tribe.