Ever since 2009, the Yankees have put on what they call HOPE Week.

Hope. Helping Others Persevere and Excel.

One week out of the summer, the Bronx Bombers spotlight individuals, families or organizations worthy of support and recognition. Each day during HOPE Week, honorees share their inspirational stories with the Yankee players, the fans and of course the media.

They are then treated to a special day courtesy of the Yankees — almost becoming like full-on members of the team, participating in team activities, in addition to the Yankees’ outreach. The experience is complete with a ceremony at Yankee Stadium before the start of the game. The Yankees have yet to announce when HOPE Week will take place this season.

Whenever HOPE Week happens, it impacts everyone. The interviews with the honorees and players alone are enough to tug at your heart strings.

Yankees.com says “all (HOPE Week) events are designed to generate attention and raise the profile of serious social issues affecting our nation and the world.”

We all have problems. A bad day. A career not going in the upward direction you may want it to. A breakup with a significant other. Trifles with paying bills. Whatever it may be.

Then you take a look at the folks involved with something like HOPE Week, and it puts everything into perspective. Take for example the first-ever HOPE Week honoree: a United States Army veteran who lost the use of his arms and legs to Lou Gehrig’s disease.

Imagine how hard this hero has to battle every day.

My experience in terms of putting everything into perspective came nine days ago. 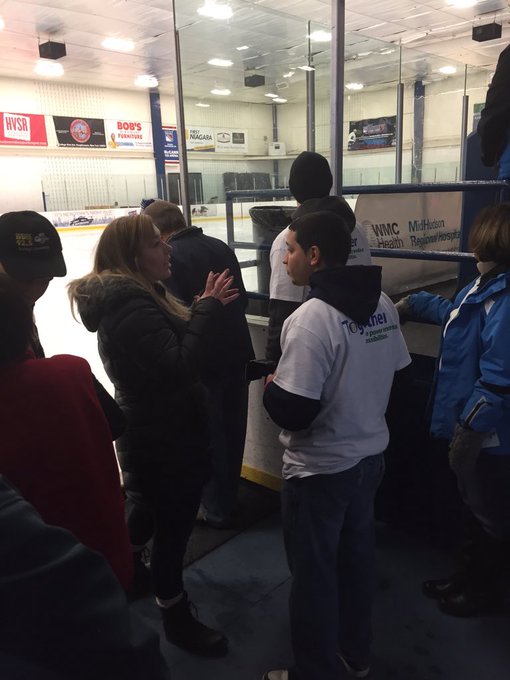 As part of my job, I covered the figure skating event of New York’s winter Special Olympics. That day, I was battling a lot of pain from an agonizing toothache. I had been toiling with a long feature story I was working on, and recently I’ve been coming to grips with the loss of someone I care about.

It’s been challenging. And not so fun. Enough to get me feeling bad.

Then I met a few of the athletes of the Special Olympics. Young men, women older than me. All with difficulties. I watched as some of them struggled to just get out onto the ice and perform. A few of them fell down, but when they did, they regained their vertical base, brushed off the slush and kept skating.

I wound up interviewing a skater from Rochester, New York. I could tell she had a hard time getting through the interview. She seemed a little overwhelmed talking to a reporter, but within a few minutes she got the words out as articulately as she could.

She never gave up. That’s what I was most impressed with.

Whatever problems I have, I now know first-hand there are others with difficulties that surpass mine. Others who have to handle those difficulties in everyday life and in everything they do, yet they still find courage to do the things that make them happy, like figure skating.

And even when they fall down doing what they love, they get back up and finish.

They persevere. They excel.

I can only guess the Yankee players feel the same way during HOPE Week every year. They likely gain that same perspective. They hear stories and meet folks who make an 0-for seem quite inconsequential.

As for me. The toothache? I went to the dentist. I’m no longer in pain. The feature? It got done. You can read it here. The loss of that person I care about? Eh. That remains to nag me day and night.

But then I consider that figure skater who never gave up. How she competed then got through my interview with her, despite it clearly being an obstacle.

If she can keep going, so can I. So can all of us.