These past few days have been reminiscent of another era.

The old days of Roger Clemens beaning Mike Piazza in the head came to mind. I couldn’t get the image of Piazza standing up to Clemens after he chucked that hunk of broken bat at him during the 2000 World Series. Even my personal memory of attending the very first Subway Series at Yankee Stadium during the regular season in 1997 echoed through my brain. The battle for bragging rights in New York was on this past weekend.

And for the first time in quite a few years, this Yankee fan felt it.

Whether it was in the Poughkeepsie Journal newsroom, listening to sports talk radio in the car, or going on Facebook and Twitter, talk of the showdown between the Yankees and Mets in the Bronx this past weekend dominated my life. Mostly I was forced to listen to how the Mets had won 11 straight games entering the Subway Series, how they are currently the team to beat and how Matt Harvey is the second coming of Jesus Christ.

Believe me, I took it all.

What most folks who talked up the Mets might have overlooked was the fact that, prior to the Subway Series, the Yankees had won seven of 10 on the road. They had taken one from the Baltimore Orioles, swept the Tampa Bay Rays in three games and took three of four from the Detroit Tigers.

Perhaps the hot start the Mets got off to was more impressive, and thus they got a little more ink than the Yankees.

But there the Yankees were on Friday to remind everyone who they are. In particular, Mark Teixeira and Michael Pineda made their presence felt. Teixeira clubbed two home runs of Jacob deGrom, the reigning National League Rookie of the Year, while Pineda tossed 7 2/3 strong innings, giving up one run to the Mets on five hits. Pineda also struck out seven and kept the ball around the plate, walking just one batter.

It brought the Mets’ winning streak to a screeching halt, though it didn’t stop the orange and blue loyalists from reminding the pinstripers that Harvey (excuse me, Jesus Christ) was starting the following day.

Yet, their yapping was backed up and Harvey delivered Saturday. The ace silenced the Yankee bats, giving up just two runs on five hits over 8 2/3 innings. Harvey struck out seven Yankees and walked two en route to his fourth win of the season, proving that yes, he has a bright future and is a bona fide stud.

That brought us to Sunday: The rubber game. The game that decided who got the bragging rights until September, when the Yankees and Mets hook up at Citi Field.

For the first time in a long time, I really wanted the Yankees to win this game. Not that I don’t want them to win any other games; in fact, I want them to win every game, like most passionate fans.

This one, however, I truly wanted. The voices of the trash talk that was spoken, posted and tweeted at me by Mets fans ringed over and over, almost as if they were taunting me. That feeling was only fueled when ESPN opened its broadcast with a shot of a Mets fan holding a sign that read “A-Rod wears Matt Harvey underwear.” 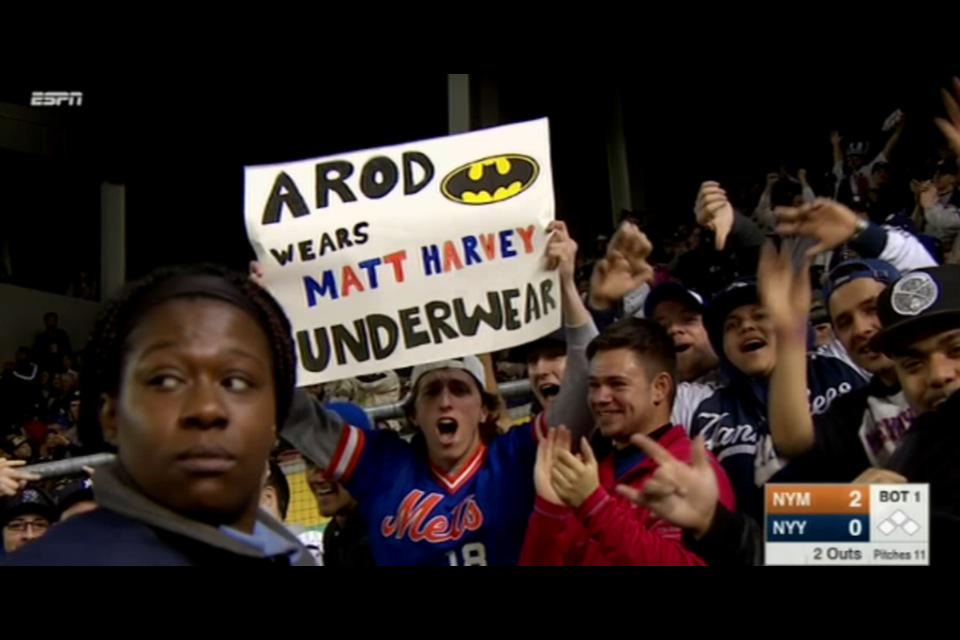 Cute. But, not really that creative. I’m almost certain I heard that one back in 2005, when Chuck Norris “Facts” were a thing.

Alex Rodriguez, me and the Yanks got the last laugh, as it was. Rodriguez homered off Mets starter Jonathan Niese, his 659th career tater, as he continues to creep up on Willie Mays for fourth place on Major League Baseball’s all-time home runs list. Rodriguez finished the series finale 2 for 4 with two RBI and a run scored.

Now, the Empire State Building is shining in Yankee colors because the Bombers took the series.

The feeling is great, I’ll admit — not just the feeling of the Yankees winning, but the feeling of caring about the Subway Series again. Getting caught up in the rivalry was, in a word, fun this weekend. It’s what baseball is all about.

Maybe the players got wrapped up in it, too. It’s possible. Rodriguez even told the press after the game, “The buzz was incredible. I just felt a lot of energy in the building. It was fun … To feel that energy, it was cool.”

Whomever the social media directors are for both clubs also got enveloped in the cross-town rivalry.

Which, if I’m not mistaken, is a first.

The Mets are a team that, for at least right now, is competitive. Like 2000, the year they captured the National League pennant and faced off with the Yankees in the World Series, they have good players. More specifically the Mets have solid, young pitchers, and the organization probably feels this is the time to turn it around and return to relevance.

I can say for sure, that’s how Mets fans feel, and in a lot of ways they have the right to feel that way.

At the same time, it’s still April and there are still 143 games remaining on the schedule. Plus, the Mets clearly have other facets of their game to work on. Case and point, their defense. A team usually cannot commit four errors in a game and expect to win.

I can only hope that when September rolls around and the Yankees go to Flushing, it’s just as competitive and the rivalry is once again at a peak.

Not to mention if both the Yanks (11-8) and Mets (14-5) are racing towards a division pennant or a playoff berth when they next meet, it’ll be even more riveting.