Yesterday I added a new piece to my seemingly never-ending Yankee memorabilia collection. I purchased the official “Winning Streak Dynasty” banner from Modells, since they were having a sale and marketing it for a relatively low price.

I figured I would first relive a very magical season: 1998.

The 1998 Yankees, who went on to set a Major League record for most games won overall in a season, began their year in a slow fashion. They lost four out of their first five games to start the year, including a 10-2 beat-down at the hands of the California Angels.

Manager Joe Torre called an “angry meeting” and aired out some of his feelings to his players. The pitchers and the position players noticed somewhat of a rift between each other; some batters were hit and felt the pitchers did not do enough to retaliate.

They eventually found their groove on April 7 against the Seattle Mariners, beating the M’s 13-7. From there, they won their next seven games and wound up ending April with a record of 17-6. 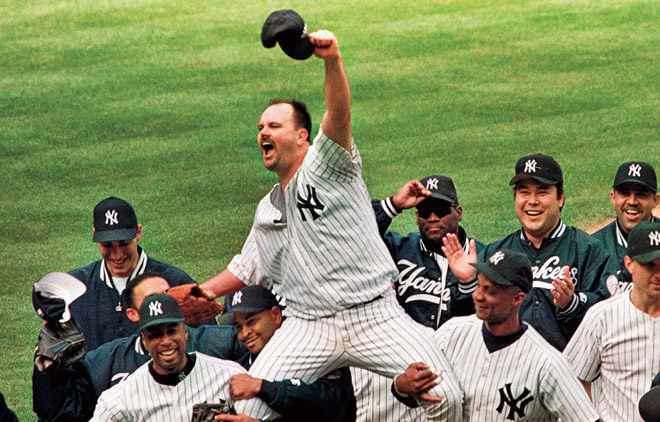 On May 17 starting pitcher David Wells tossed a perfect game at home vs. the Minnesota Twins. He retired 27 consecutive batters leading the Yanks to a 4-0 win. It was only the 15th perfect game in MLB history and only the second perfecto thrown by a Yankee.

Later in the season on Sept. 1, Wells almost threw another perfect game. Facing the Oakland Athletics, Wells was perfect through 7 2/3 innings. Needing only seven outs for another perfect game, Jason Giambi lined a single off an 0-2 count to break it up.

May 19 marked a turning point in the season. After Baltimore Orioles’ closer Armando Benitez allowed a three-run home run to Bernie Williams, he pegged Tino Martinez in between his shoulder blades. He was immediately run from the game, but the HBP practically caused a riot.

A fracas ensued and the Yanks and O’s exchanged shoves, and eventually punches.

The Yankees went on to beat the Orioles 9-5 in that game, and also swept them in that series three games to one.

The Yankees only lost 17 games in the summer months of July and August, while winning 42. Williams described the season as a “year-long tear,” as there really was no other way to characterize how the Bronx Bombers played.

They basically rolled into towns and beat teams up, clinching the American League East with a 7-5 win over the hated Boston Red Sox on Sept. 4–the earliest they had clinched the AL East since 1969. To that point in the season they won 102 games and were set to meet the Texas Rangers in the American League Division Series…

In the ALDS, the Yankees easily handed the Texas Rangers a clean sweep. Juan Gonzalez, the player who eventually captured the 1998 A.L. MVP Award was no match for the starting pitching the Yanks had. David Wells, Andy Pettitte, and David Cone shut down the Rangers three games in a row, each notching a playoff win.

Rookie Shane Spencer, Brosius, and right field warrior Paul O’Neill led the Yanks, all hitting home runs in the first round of the postseason.

The American League Championship Series pitted the Yanks against began the defending A.L. Champs, the Cleveland Indians. New York was looking to erase their 1997 ALCS defeat and beat the Tribe 7-2 in Game One.

Game Two however was an ugly defeat for the Yanks. The game was tied up until inning number 12 when Travis Fryman laid down a bunt. Reliever Jeff Nelson threw the ball to first base, as the second baseman Knoblauch covered the bag. The ball hit Fryman in the back and Knoblauch argued with the umpire instead of retrieving the ball, which at that point was trickling down the first baseline.

Enrique Wilson scored and the Indians went on to win 4-1. The momentum carried into Game Three, as the Indians brought the lumber with them. Playing at home, sluggers Jim Thome and Manny Ramirez left he yard twice, and Mark Whiten added a homer en route to a 6-1 win over the Yanks. They pounded Pettitte while newly acquired Yankee Bartolo Colon cruised to a complete game victory.

But the Game Three loss marked the last time the Yanks would lose a playoff game in ’98.

Down two games to one, Orlando “El Duque” Hernandez took the hill, needing a clutch outing to keep the Yanks alive. Seven shutout innings later, and with some help from O’Neill (who homered) Hernandez and the Yanks picked up a 4-0 Game Four win.

Game One winner Wells took the ball again in Game Five. Now with the ALCS even at two, the Yanks rolled to a 5-3 win, under the strength of a fourth inning home run off the bat of Davis to give the Yanks a three-run lead. Kenny Lofton and Thome both hit home runs, but the Yankee bullpen was able to hold off the rest of the Cleveland lineup.

Now needing one win to get the fall classic, the Yanks came home to play Game Six. They jumped all over Charles Nagy, scoring six runs in the first three innings. Cleveland did not give up easily however, scoring five runs in the fifth, with the main blow being a grand slam from Thome.

The Yankees answered with three runs in the six, plating runs on a triple by Derek Jeter and a single by Williams. They went on to make a winner out of Cone, beating the Indians 9-5 and winning the A.L. pennant for the 35th time.

The Yankees were then headed for the World Series, set to play the San Diego Padres.

1998 was the 94th World Series played in MLB history and the Yankees were gunning for their 24th title in franchise history. The Padres were looking for their first World Series victory, having lost the fall classic in 1984–the only other year in their history that they won the National League pennant.

In Game One, San Diego took a 5-2 lead, getting home runs from sluggers Greg Vaughn and Tony Gwynn. But going into the seventh inning, the Yanks came up with a plan. Knoblauch atoned for his ALCS blunder, smacking a game-tying three-run home run into the left field seats.

Later in the frame with the bases loaded, everything changed.

Martinez came up with the bases loaded and on a full count, blasted a grand slam home run into the upper deck tier seats in right field, giving the Yankees a 9-5 lead. 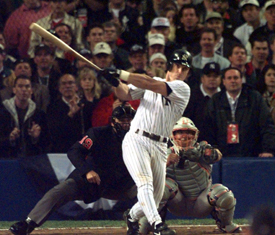 And it was the turning point in the series, simply because the Yankees carried the momentum from that home run with them the rest of the way. In Game Two, the Yankees beat the Padres 9-3, with home runs off the bats of Williams and Jorge Posada.

Heading out to San Diego and the Yankees up two games to none, Cone took the mound in Game Three. Both teams didn’t score until the sixth, when the Padres plated three runs. The Yanks answered with two in the seventh, receiving a two-run home run from Brosius.

Trevor Hoffman was called on in the eighth inning. San Diego manager Bruce Bochy wanted his closer to nail down a six-out save leading 3-2 going into the frame. Hoffman folded however, giving up a three-run home run to Brosius, which gave New York a 5-3 lead.

Vaughn cut the lead to one with a sac fly in the bottom of the eighth, but the Padres could not rally all the way back, and the Yankees took Game Three, 5-4.

Many people argue that Game Four was just a formality, and in a lot of ways it was. The Padres were all but defeated in the ’98 World Series after Game Three, having been outscored 24-13 in the previous three games. Pettitte toed the rubber, hoping to wrap up New York’s 24th Championship.

Both teams were kept off the board until the sixth, when the Yankees plated a run on a groundout by Williams that scored Jeter. The Yankees added two more runs in the eighth, with an RBI single by Brosius and a sac fly by Ricky Ledee to score O’Neill.

The Padres made an effort to come back in the eighth, loading the bases on Nelson. However, Mariano Rivera wiggled out of the jam and pitched a scoreless ninth to clinch the World Series title. 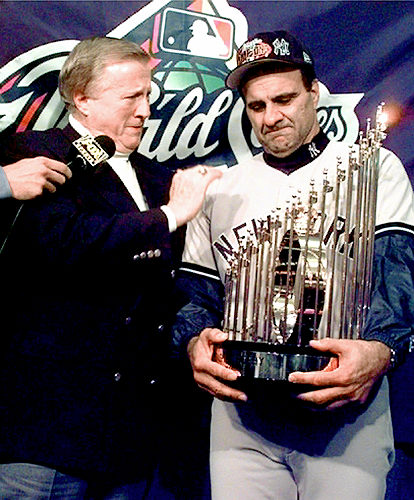 1998 was just one of those special seasons that nothing went wrong. They have been described as “The Greatest Team Ever” being that they won 125 total games and only lost 50. Those types of seasons don’t come around very often and when they do, it’s important to remember them.

I will always remember the 1998 baseball for the Yankees–not Mark McGwire or Sammy Sosa breaking the home run records. I had more fun watching a team play every game as if it were their last than watching two guys race for a hallowed baseball record.

I think that says a lot about how exciting the Yanks were.