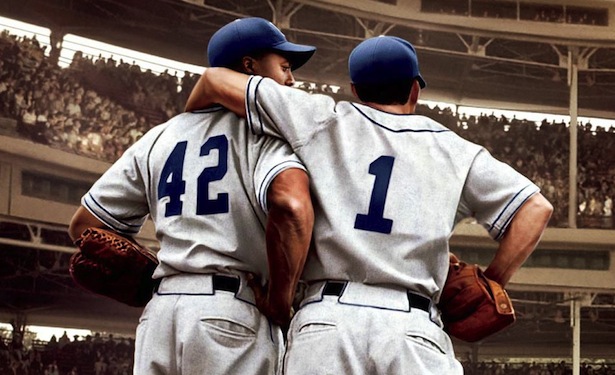 If any baseball player, past or present, deserved his own biopic, it was Jackie Robinson. And from the moment I heard about “42” I was interested; curious to see how exactly director Brian Helgeland was going to depict the legendary pioneer of baseball.

The depiction couldn’t have been any better. It was incredibly well done.

Of course, being the fan I am, I went to the movies with my friends geeked out in a blue Dodgers’ shirt with “Robinson 42” on the back, the outfit complete with a Brooklyn cap. I suppose it was my own little way of paying tribute to such an icon. 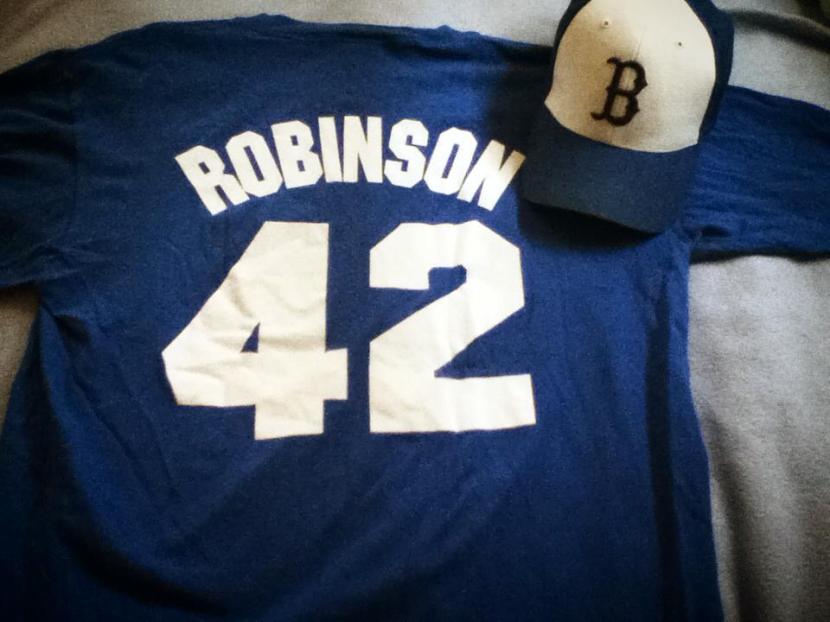 And come on. It’s not as bad as dressing up like Batman, cape and cowl, and camping outside a movie theater before opening night of “The Dark Knight Rises.” I swear, I’m not one those people.

Robinson was played by Chadwick Boseman, an actor I knew absolutely nothing about going into the movie. Aside from a few one-time roles on TV shows like Fringe, Justified and CSI:NY, among others he didn’t have much acting work under his belt according to his IMDb page. To say Boseman did a fine job as Robinson would be an understatement. I obviously never saw Robinson play, but in doing some historical research, Boseman had it down pat.

The batting stance, the at-bat ritual of picking up dirt and wiping his hands with it; heck, even his looks – Boseman was the right choice for this role. How he resembled Robinson in this film made me think of the way Barry Pepper looked a lot like Roger Maris in “61*.”

In biopics, looks can tell the whole story.

I knew Robinson dealt with a lot of racism, but “42” really gives the viewer a clear picture of how much hatred he truly was forced to endure. When he gets signed by Brooklyn from the Negro League, then eventually called up to the show from the Montreal Royals in 1947 (the minor league affiliate of the Dodgers at the time) Robinson receives an onslaught of name-calling – and “42” doesn’t exactly pull back.

In one scene he is heckled disgustingly during an at-bat by the Philadelphia Phillies’ manager Ben Chapman (Alan Tudyk). Throughout the entire AB, Robinson stood stoic – consciously aware of how upset, how angry Chapman’s words were making him, yet suppressing his emotions with the utmost will power before privately breaking down; taking out his frustrations on a bat in the tunnel to the clubhouse.

I can’t imagine having to deal with situations of that nature on a routine basis.

Mentioned in the movie was the fact that other players suffered similar name-calling. For instance it’s brought up that Hank Greenberg, one of the best players the Detroit Tigers ever saw, was called out because he happened to be Jewish. Also noted is the way the Yankee Clipper himself, Joe DiMaggio, was called slurs for being an Italian-American.

Still, I’m not sure if even they went through the type of hardships Robinson coped with.

Harrison Ford’s performance as the gritty-yet-faithful old cigar-chomping Branch Rickey was nothing short of impressive; a typical outstanding job by the same actor who portrayed both Han Solo and Indiana Jones. Rickey, the owner of the Dodgers and the brainchild behind the idea of adding Robinson to his ballclub, was one of the only white supporters of Robinson in the movie – along with teammate and Brooklyn shortstop Pee Wee Reese, played by Lucas Black.

Being a huge fan of “Friday Night Lights” (which Black starred in as quarterback Mike Winchell) it was nice to see Black do such nice work in another sports movie. When the white Dodger players attempted to coax Reese into signing a petition to not play on account of Robinson’s presence (boycotting the game because they had to be teammates with a black player), Reese takes a stand and opts not to sign his name.

In a way it was comforting. Even though Robinson was surrounded by hate, he had an ally.

Christopher Meloni served as the wife-cheating Dodgers’ skipper Leo “the lip” Durocher. Robinson’s color didn’t seem to faze the manager, but it’s not as if his character lasted long, anyway: being suspended at the start of the 1947 season because the CYO (Catholic Youth Organization) somehow outed him as an adulterer.

If nothing else, the character throws in a “little-did-you-know” aspect.

Like Boseman, I had no clue who Nicole Beharie was before the movie. Not only did she give a mind-blowing performance as Rachel Robinson, she was absolutely beautiful to boot.

I think I may have a new celebrity crush.

And I get the feeling when Rachel saw the movie for the first time, she was happy with how Beharie portrayed her. Rachel has been fittingly dubbed “The First Lady of Baseball” – undoubtedly she had to have been proud of how she and her late husband were rendered on screen.

The character of sportswriter Wendell Smith (Andre Holland) made the movie more interesting, too. Smith was assigned to help Robinson along, be sort of his eyes and ears, so-to-speak. When Robinson hits his first home run, Smith is sitting in the grandstands with his typewriter (black sportswriters weren’t allowed in the press box at the time) smiling at his friend’s accomplishment as a divided crowd both cheered and jeered the tater. 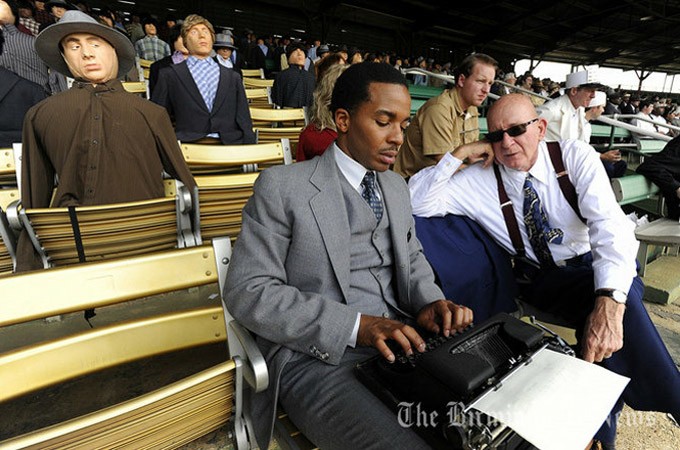 Looking at him with his typewriter as Robinson rounded the bases, my only thought was,

“Today, that’d be an iPhone and he’d be tweeting about that home run.”

Along with strong and accurate character representation, “42” gives a kind of feel “The Sandlot” gives: a warm, fuzzy kid-like feeling, at least in two particular scenes.

In Robinson’s first game in Montreal, he gets nothing to hit and draws a four-pitch walk. He steals second, swipes third, and distracts the peeved pitcher enough for him to balk, which enables Robinson to score from third.

A young black man (who at the end is revealed to be a future major leaguer named Ed Charles) is attending the game with his mom, and is overly impressed with how Robinson – the man who is visibly giving him hope – singlehandedly created a run. His mother didn’t understand how or why Robinson was awarded home plate and inquired about it, to which Charles responds,

Baseball is a kid’s game and kids say the darndest things.

The other scene that brings out the childlike nature of baseball is later on when Charles is at the train station, trying to get a glimpse of his hero before he boards. Robinson gets on the train without even looking in his direction, much less acknowledging Charles.

That is, until the train starts chugging.

Robinson calls back to him. “Young man!” and then tosses him a rock.

It had to be my favorite scene in the movie. The authenticity of it was magical.

If you are a baseball fan – and even if you’re not – “42” is a must-see. Filled with history, a stellar plot, countless “did-you-know” facts, and incredible character depiction, it is easily (now) in my top-3 favorite sports movies.

I learned from “42” that Robinson didn’t just break the color barrier in baseball. He showed humility in a divided and fearful nation – and I only use the word “fearful” because people felt he was different. People are always afraid of what’s different.

Yet his gentle and quiet personality and ability to hold back in the face of hate only showed that, if he was different, he was different for the better. He showed the guts to endure an environment full of folks who spiked him with their cleats, shouted racist remarks his way while he stood in the batter’s box, and threw at his head – and showed those guts with bold, astounding patience and wisdom.

There’s not much more to say about “42” except GO SEE IT. You will be moved. 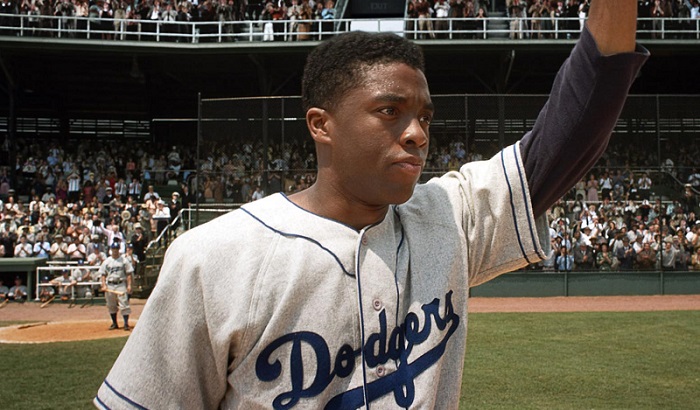